The Most Beautiful McDonald’s In America

Last week, I was out in Long Island scouting around Jericho Turnpike, which, if you’ve never had the pleasure of driving, is one of those hellish, strip mall-lined highways with traffic lights that are perfectly synchronized to make your travel time as long as possible. As I was driving, I happened to notice a McDonalds sign up ahead. Nothing too special about that, except where the McDonalds should have been, there seemed to be a big white mansion. Maybe it was around back or something? And then I realized… The mansion was the McDonalds. This 100+ year old Georgian mansion is indeed a McDonalds, and while well known to locals, it totally caught me by surprise. I practically expected a maitre d’ to greet me as I went inside. Known as the Denton House, its bones date back to 1795, when it was constructed as a farm house by one Joseph Denton, a descendent of the founder of the village of Hempstead. In 1860, it was given a Georgian makeover, complete with gingerbread ornamentation, and throughout the 1900’s, found commercial use as a funeral home and a series of restaurants.

By 1986, it was abandoned and on the verge of falling down. McDonalds purchased the property with the intention of tearing it down and replacing it with a standard McDonald’s restaurant. Thank God for the citizens of the New Hyde Park, who worked to secure landmark status for the building in 1987.

McDonald’s had no choice but to restore the property and work within the parameters of the landmarks commission, which ultimately resulted in their most beautiful restaurant in America (if you know of a better example, please let me know). It was decided to restore the property to its 1926 appearance, based on an old photograph. Opened in the early 1990’s, the house remains in fantastic shape to this day. …which offers a pretty unique McDonald’s eating experience (how cool would it be if it was actually open, or covered by screens?). But the details continue around on its eastern side… …from its shuttered windows and brick chimneys to its eaves dripping with gingerbread ornamentation: The western half is equally stately… …though, er, methinks the drive-through might not be original to the Denton farmhouse: But had someone showed me this picture, I would have NEVER guessed it was a McDonald’s. Unfortunately, the inside has been totally gutted and redone without much inspiration. Still, it is far more unique than your typical McDonald’s, with a grand staircase leading to an upstairs dining area. Also, there’s something fascinating about being in an enormous open-air mansion, and I definitely appreciate how the roof has been revealed. Almost as an afterthought, the small ordering area is nestled to one side: I love the New Hyde Park McDonald’s, if for no better reason than how clearly it makes the argument for historic preservation. We can live in a world of this… Really don’t have anything else to add.

The Hidden Courtyard At The Plaza Hotel

Exploring Hangar B, Where Dying Airplanes Return To Life 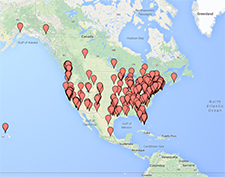